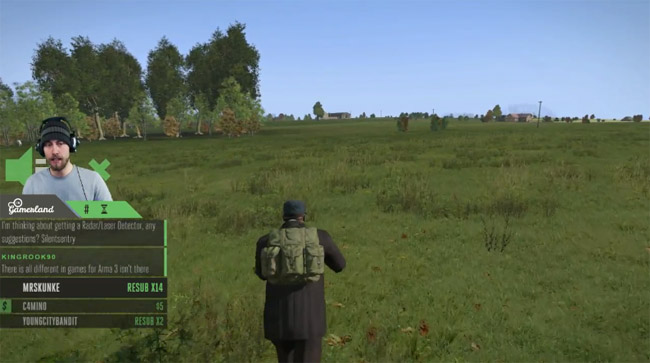 We came across SilentSentry while browsing the DayZ channel directory on Twitch. His personality and the way he interacted with his community instantly drew us in. We had the pleasure of speaking with Ethan about growing a community on Twitch, picking the right sponsorships, and what it was like when he faced the intense battle during the Survivor GameZ IV. Enjoy the read below.

Streamer News: Can you please introduce yourself and tell us how you came up with your Twitch username and channel theme?

My name is Ethan. I’m known as “SilentSentry” online. My name was essentially the product of a long night of throwing names into the choose username box. A lot of people often ask why my name is Silent when I tend to talk so much. The name SilentSentry was primarily inspired by my experience in public service. I worked at a local hospital for 3 years, and attended college for criminal justice before pursuing paramedic sciences. The name originally meant someone who watches/protects without intervening. I suppose you could say that applies to my role as a father as well. The “Sentry” part was also partially inspired by the engineer class in the game Team Fortress 2. The Engineer uses a sentry gun to defend objectives. In the end, the name sounded good, and was available. So it stuck!

Streamer News: It stuck out to us when we would browse through the DayZ section of Twitch, and ever since then we’ve become a big fan of the broadcasts. Primarily you used to play DayZ,now you have broken off and have played a variety of games? Would you say playing a single game helped build your core audience?

From my experience on Twitch it is much more difficult to build a community as a variety caster than playing one game primarily. The way Twitch works currently, there are only two ways to discover a stream. One way is to be searching in a specific game category and to stumble across the stream. The other way is by word of mouth or some other previous exposure to that particular channel. If you play one game on a frequent basis, you have the benefit of repetitive exposure to that game’s community. Repetitive exposure combined with a consistent schedule means you are constantly showing up on the same peoples feeds. This is by no means a key to gaining an audience, but it can be more beneficial than hopping around to different games too often.

Streamer News: Would you say it worked for you? Or is it more along the lines of right place and right time?

Exposure is certainly about right place, right time. Even more importantly is being prepared once an opportunity does present itself. I can say with confidence that my community would not be what it is today if I had not been present/prepared for the opportunities that became available to me.

I’d like to add that when I began streaming, I never had any intention of creating content in only one community/game. Around the time I started broadcasting DayZ was THE GAME for me. I had already accumulated 1000+ hours in the game. It was the game I most enjoyed playing at the time, and that translated well to those who chose to check out my channel. When I felt it was time to move on and branch out to more games, I did. I’ve never played a particular game for a view count.

Streamer News: For sure, It’s been great seeing your channel transition and grow over the past year. Clearly you are doing something right no matter what game you are playing. As far as branding goes, your logo is very recognizable. Your website, intro, and outros are very well done. How important was it to you to have solid branding for your channel?

To me quality is very important. No stream is perfect, and there is always room for improvement. When I began streaming my wife had just finished her Associate’s Degree in interactive/graphic design. My channel ended up turning into a personal project of hers. I consider myself incredibly lucky that she was so supportive of my ideas, and willing to give so much of her time. I feel that having high quality, and consistent design throughout my channel definitely helped me stand out in the crowd of other thumbnails when I first started broadcasting.

Streamer News: Yeah we definitely like the animations, and the wait screens during your broadcasts. In the past you’ve tried multiple streaming schedule times while maintaining and growing your community. Would you say you have found a good time block where others aren’t streaming?

Twitch is 24/7. There are always people streaming, and I don’t feel any particular time block is overly beneficial for growth. It’s much more important to find a time slot that you are most happy with. A time slot where you are most awake, active, in a good mood is far more important for your channel that streaming at a certain time simply because of numbers. That being said, if you can find a time slot that benefits your mood in addition to your rankings in the game you are currently playing it would be wise to take advantage of that!

I’ve had to change my schedule multiple times since I began broadcasting. Mainly due to the fact that my families schedule changes with school/work/life. I have to work around them. My current schedule (3rd shift) is the schedule I seem to default to when I have more say in the matter. I’ve worked 3rd shift at every job I’ve had, and it seem to be the time that I’m most active. It’s also nice to be able to work uninterrupted!

Streamer News: Agreed, those late night streams are always good to watch! You’ve acquired a few solid sponsorship’s over your broadcasting career. What were the steps like in order to obtain and get noticed by these sponsors? Also how did you know which ones to choose and which not to?

It’s not uncommon for websites/companies to start contacting you early on as a broadcaster. For me, I have one rule. I will not accept make a deal with any company or product that I don’t personally like or wouldn’t use myself.

All in all I’ve turned down way more sponsorship opportunities than I have accepted. Simply because their products aren’t something I’d use. Or don’t feel comfortable advertising. My primary sponsorship’s are ones that I’ve reached out to myself. I use their products, and feel confident that the relationship between our brands can be equally beneficial. When you are able to show a company that you actually use their products and are knowledgeable of them, they are much more likely to want to work with you in my opinion.

Streamer News: We feel the same way. If you do not back a particular product, then why support it. What was that moment like when you were in the Survivor Games finals and was pinned behind the cargo cases?

I’m glad you brought this up! This was one of my favorite moments of my broadcasting career so far. Unfortunately the last 30 minutes of the Survivor GameZ was pretty frustrating. DayZ is in an early state of development, and known to have it’s issues. Up to that point me and my partner Anthony_Kongphan had been able to avoid any issues. During the last 30 minutes we had two guns disappear on us, leaving me with one of the weakest guns in the game to rely on instead of the gun I had had the most practice with. Other that that it was an amazing event to take place in, and my heart was pounding the entire time!

It was also one of my first experience where I was not allowed to have my chat room up during my broadcast. Which was a great learning experience.

Streamer News: As a viewer, it was awesome to watch from your perspective along with the Survivor Games perspective. It was certainly one of the most intense moments in the tournament. We just started a fresh new year, what is in store for the Silent Sentry Twitch channel, brand, and community in the next few months?

For the last several months I have been focusing on growing my abilities as a streamer. I have played games that I’m less skilled at, or require much more attention than I’m used to. I feel it is important to step out of your comfort zone if you want to improve! Now that the new year has come, I hope to focus on growing our community even more. In addition, I’m looking into a few stream teams, and would like to improve on things I feel I’m weakest at like networking and making more joint efforts with other broadcasters. I am also taking steps to encourage the community to be active 24/7 with apps like Discord, and community game servers. As always I’m going to take things day by day and see what opportunities become available!

Streamer News: We look forward to it! As we wrap things up, is there any advice you can give to new, upcoming, or even seasoned broadcasters on Twitch?

The most common advice I give is to not get too wrapped up and focused on numbers. It is important to study your numbers, and to understand what works and what doesn’t. However, I see way too many people getting discouraged when they don’t meet their goals. It’s important to remember that YOU have chosen to spend hours on stream/money on equipment, but that doesn’t mean anyone owes you anything in return. Stream because you enjoy streaming. Play games because you enjoy gaming. Being happy doing what you’re doing will help your broadcast way more than anything else in my opinion. Also, be yourself! Everyone is unique, and being yourself is an effortless way to stand out from others. It’s also important to remember that your view count has nothing to due with the quality you can achieve, or any growth you could have in the future.