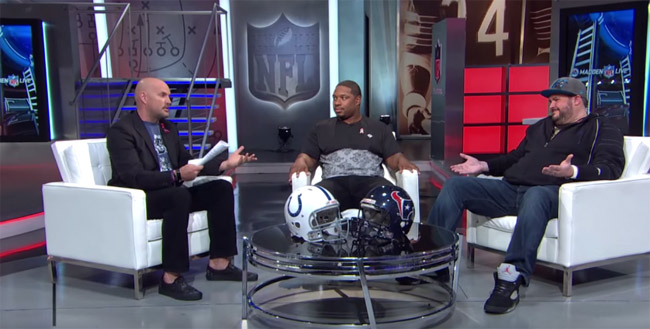 We had the opportunity to speak with Scott Coltrane Cole. Coltrane is a man of many talents, from working with the NFL Network, to the newly launched NFL Twitch channel, even managing his own Twitch Channel. It was great getting insight and knowledge from Scott on different topics of the industry. Take a look at the interview with Coltrane below.

Interview by: Chris
Images From: ScottColtraneCole/NFL

Streamer News: Hey Scott, can you please introduce yourself and explain what you do for a living?

Yes, I’m Scott Cole aka Coltrane. I’ve been broadcasting sports and video games for the past 18 years. When I’m not doing that my full-time gig is a Creative Director for many fortune 100 brands and currently work for a non-profit called the Peace Center in Greenville, SC.

I started with the Team Sportscast Network aka TsN back in the early 2002. I worked with many great announcers that are still relevant today, like Joe Miller, djWheat, Warwitch, etc. We were broadcasting games all around the world on an eSports level, such as CS 1.6, Call of Duty, Quake, etc. Call of Duty 1 was the love of my life.

Streamer News: Wow, that is amazing. Can you give a comparison of what eSports was like then compared to what it is now?

It’s actually very similar to what it’s starting to feel like today. Back in the mid 2000s every brand was trying to get their hands on the magic that was eSports. We were just getting the handle of doing video, something Marcus Graham aka djWheat, so elegantly described in his Twitch Keynote. To be included in the group that he really believes grandfathered what you see today as Video Game broadcasting is very humbling. We seemed to hit a lull for a few years, but now the fire is back again and it’s a great time to be in the video game industry.

Streamer News: Speaking of, the NFL recently started broadcasting Madden NFL Live on Twitch. Which you are a host on, was it your idea to bring the NFL Madden Live platform to Twitch?

John Imah, who works in strategic partnerships at Twitch, I believe was the first to come up with the idea in which they pitched to EA Sports and the NFL Network. I was brought on the show to be that connection between the TV Broadcasting world and the Twitch broadcasting world since I have that experience in both. I currently broadcast college sports for ESPN as well in the Southeast, while also streaming sports games such as Madden, FIFA and NBA on Twitch. With 26 years experience playing Madden, 18 years in broadcasting real and fake sports, it was a perfect fit for a pioneering show like Madden NFL Live.

Streamer News: Madden NFL Live is the first of its kind where a multi billion dollar company like the NFL is broadcasting Madden game discussion on Twitch. What is the process of the content you guys come up with for each show?

There are two great producers on the NFL Network side of the show in Alex Wilk and Dylan Milner. They come up with the content while working with EA Sports and Twitch teams. EA Sports provides exclusive ratings and Madden Ultimate Team items for us to reveal on the show while Twitch and myself makes sure that we are staying authentic to the gaming audience. We struggle with making sure we hit that right target of the casual gamer while giving insight and a voice to the hardcore Madden gamer. The nice thing about the NFL Network is we also have access to former and current players and well as all the NFL licensing and brand. A lot of hard work goes into putting together an hour show that is about video games, but can still hold the attention of the NFL Network audience. With us simulcasting on TV, NFL.com and Twitch.tv/NFL, you’re hitting a wide range of audiences their with many different needs and expectations.

Streamer News: We like the transitions you guys do from real live game play to video game gameplay, it’s a cool feature we noticed while watching.

And that’s a true testament to the Partnership between the NFL and EA Sports to have access to that licensing.

Streamer News: Agreed, as we stated previously when we saw the NFL broadcasting on Twitch we got super excited to see a broadcast about Madden. Even if you are a casual or hardcore gamer like you said above. It works for everybody.Can you share any details of what you have planned in the near future for the NFL Twitch channel?

We have had talks about expanding the content to more than once a week on Twitch to build that audience on the NFL’s channel, but nothing yet is concrete or confirmed. And of course there’s some exciting stuff I can’t mention, yet. You have to realize what mountains were moved just to get to this point, and with NFL new to the space we decided to focus on launching the show first. The possibilities for this channel are endless.

Streamer News: That is the beauty of it, the possibilities are endless with a company like the NFL & Twitch. There can be so much content available to fans of the Madden Franchise and the NFL.

I can see in the future exclusive content, just for the Twitch audience from the NFL. So if you’re not sure you should support this channel, you should, because the success of what is happening now will determine the amount of effort put into it down the road.

Streamer News: What is your personal goal for the NFL network as a host and broadcaster on Twitch?

My goal is to be the ambassador for sports on Twitch. For sports gaming to get the level of a Dota, CS:GO or LoL, we have to stop hating and come together as a team. I think the pros in Madden get that, but the community has to get that too. So stand up to the hate and share the love.

Streamer News: Agreed, so everyone go follow the NFL Twitch channel right now! (Laughs) If someone like a Twitch viewer, or someone in broadcasting wanted to get into the career of what you do, what advice can you give to them?

Well I went to school for broadcasting, that’s where the love started for me, but even before then I was holding fake “sportscenter” shows in my bedroom with my dad’s VHS camcorder, delivering the events of the neighborhood’s backyard basketball, whiffle ball and football games. My freshman year in college I started to become the voice for the basketball team and anything else they’d let me broadcast. I spent hours on FM and AM radio talking sports. Then as previously said, TsN, ESPN, Twitch and now the NFL Network came along and that provided me outlets to do what I love. I love Twitch, I mean that. I still hate the haters, but love the supports. And I tell them that daily. Twitch has bent over backwards to give me these opportunities. I’m just trying to make everyone proud. To use my God-given talents to the best of my ability. And with all that, it’s my family and my wife Amanda that have allowed me to chase this crazy dream, that now isn’t so crazy.

Streamer News: Yeah, you could say you are working your dream job. But keep in mind Scott has paid his dues, and put in the work to get to where is is today. These things do not happen overnight. We also noticed you play your subscribers in Madden, you went 12-1 the other night, how often do you play them?

We try to play with our subscribers as much as we can, those are the real supporters of your stream that are willing to make a little sacrifice to support what you’re trying to accomplish. We’ve done Pro Clubs in FIFA, played in the parks in NBA, but lately I’ve been playing my Twitter haters and keeping them quiet. Funny how many think they can beat you, and maybe once in awhile they do, but the majority are full of humble pie by now. I think were around 47-3 now against the haters this week. But to get back to your original question, I much rather play WITH my fans than AGAINST them. That builds relationships instead of tearing them down

Streamer News: Of course, it’s just cool that you take the time to play with your subscribers, encompassing a full experience with being a host on the NFL Twitch Channel a personal broadcaster, and a fan of Twitch.

We also do meet and greets on Teamspeak where my subscribers can hold an AMA with me after streams. These 30 minute sessions usually last for hours. And I’m more than happy to do it.

Streamer News: That’s awesome, follow Coltrane’s Twitch channel and subscribe if you aren’t already. There are only so many broadcasters who take the time to speak to the community at great lengths. So what does Scott Coltrane Cole’s Fantasy Football team look like?

6 straight years winning the super bowl. In fact this year they didn’t even invite me back. I take that as a compliment. 3-1 this year and relatively healthy. Looks like I’m poised to make another deep run on NFL.com Fantasy. It helps that I work the Madden NFL Live show with a Fantasy legend like Adam Rank.

Streamer News: For sure, 6 years straight though damn! Not sure if we would invite you back to our league either! (laughs)

A lot of luck.

Streamer News: Scott, thank you for your time, if you would like to give any shoutouts or plug any channels that would be great. It was great speaking with you.

I’d like to thank everyone that got me to this place, I’m very humbled for these opportunities. At Twitch there’s Marcus Graham (djWheat), Jordan Tayer (SomaJT), Brandon Ewing (Atrioc), Jordan Wilson, John Imah and Anthony Danzi. At the NFL Network there’s Alex Wilk, Dylan Milner, Marc Watts, Tom Brady, Maurice-Jones Drew, Adam Rank and the whole crew behind the scenes of Madden NFL Live. Big shoutout to Furman University and Bryant Lambert for letting me put my voice on the air for all these years. And lastly my family and my wife Amanda. Without them, I am nothing.

If I forgot anyone, yell at me on Twitter @ScottColeShow.