We Spoke to IngameAsylum about his Asylum 2.0 Twitch Channel Rebrand

IngameAsylum revealed his new, highly anticipated channel rebrand to his community on Sunday and needless to say it lived up to the hype.

After mysteriously disappearing  for a week and leaving his community with nothing but a series of puzzles to solve, he created an interactive way for them to find out about its reveal.

We spoke to IGA about the inspiration behind the community interactable puzzles, the process in determining how Asylum 2.0 looked, and more.

Streamer News: A week ago your stream was mysteriously interrupted and you disappeared without a trace. Suddenly you tweeted out a link to a series of puzzles that led to a countdown for the reveal of your new channel branding, Asylum 2.0. What inspired you to make the reveal community driven?

IGA: Kojima Productions’ P.T. was a big inspiration, but honestly any and all video games that have secrets to be uncovered helped inspire this — such as Mortal Kombat (1992), Undertale, FNAF, MGS, and many more. I’ve always found that events shrouded in mystery draw a lot of speculation and dialogue, and bring about the most interest and excitement among the communities involved — especially when dealing with pop-culture; whether it be movies, games, comics/books, etc… That fun and excitement is then multiplied by a hundred when the shrouding mystery was intentional; and hidden breadcrumbs leading to the answer were left behind for the community to discover and piece together.

I remember being a kid at school speculating and spreading rumors with friends and other random kids on how to find Reptile in Mortal Kombat. I’d spend countless hours playing MK just to find him. I love that shit, man, and people are drawn to that stuff like moths to a flame! And not only was all the mystery and speculating incredibly addicting, but it brought me and my friends together and helped me make some new ones! The community aspect of it is pretty amazing.

Nothing has changed since then. It’s now 2016 and we’re still seeing the same reaction and collaborative efforts among communities even with Capcom’s Resident Evil 7 demo. I’m now 30, and I still love this stuff. These sorts of things are very community-oriented just like Twitch, and they bring people together. The joy and excitement I get out of being part of a larger community all putting their heads together and working as one to crack a mystery wide open is probably what inspired me most.

Streamer News: Everything from the way your stream got interrupted to the cohesive puzzles were well thought out. It was probably one of the most creative brand reveals that we have seen on Twitch. How did you come up with the idea? Did you involve your mods or other community members in the process?

IGA: None of my moderators knew what I was doing. I wanted to keep it a secret, and allow them to have fun with it as well. Unfortunately, I couldn’t do this without help. So, I approached two people from my community: Futuro212 to code the website, and Alaspoorvillain to be the play-tester. They were both so willing to help, it was awesome.

As for the idea and its creation…

Well, because P.T. was a big inspiration, I took example from how Kojima Productions handled P.T. and its release. They used a lot of misdirection, the element of surprise, cryptic puzzles, fear, and mystery to grab people’s attention, and it worked like a charm! I wanted to utilize the same tools and designed everything with all that in mind.

I wanted to do my best to design an experience that captured at least a LITTLE bit of the horror, fun, and mystery that my inspirations had done. I think I did an OK-job judging from the response and reception.

Most of my ideas came about quite naturally from within the limitations of my capabilities, and tools I had at my disposal. I looked up creepy sound effects and unsettling ambience on youtube, video game tracks, and learned to make Audacity my friend.

Now, because I’m already pretty nutty on cast, the only way I could shock my community was to just do something completely out of the ordinary, abrupt, and completely unannounced….but at the same time it had to be within Twitch TOS and not too disturbing haha! So, I figured, what’s more jolting to a viewer than when a cast you’re watching and enjoying suddenly gets interrupted? Then my imagination just sort of started taking off from there. I felt the interruption needed to be jarring and creepy as well for a lasting effect. Everything sort of just snowballed from there into a catchphrase (FIND ME), changing the panels and offline screen.

Streamer News: You went completely dark on Twitch and social media until the conclusion of the weeklong countdown. In the meantime, the hype amongst your community only grew and they absolutely loved the mystery of it all. Did you think this would be so well received?

IGA: I did and I didn’t. This was one of those things where I knew I was sitting on something so different that it could either hit the mark and do really well, or it could crash and burn and be a complete failure. I’m glad I took the chance.

I thought it was a cool and fun idea. I designed it with my inspirations in mind, but wasn’t super confident in my ability to accomplish a similar effect to those video games that inspired the project. There were plenty of times during its development where I doubted what I was doing. See, I have this really bad habit of obsessing over things like this to the point where it will so completely consume my mind that I just start to doubt every decision I make lol! I obsessed over its design for a little over 4 weeks. In the beginning I was really only concerned with things such as puzzle difficulty, creativity, length, and the overall fun-factor. Eventually, however, it just got to the point where I was doubting every tiny little detail like font choice, how loud certain sound effects should play relative to others, and how big or small certain texts should be… lol it was a stressful time leading up to its release, but it was worth it.

Streamer News: As soon as you tweeted out the link to the first puzzle, people dove right into it trying to figure out solve them all as quickly as possible. Did it take long for them to figure it out? How long did you think it would take to solve?

IGA: Here’s the funny thing, I was hoping the puzzles would keep my community busy for 2-3 days out of the 7 I planned on be M.I.A. for….it took them about 45 minutes to crack the website and solve all the puzzles LUL

I’ll be the first to admit though that I underestimated my community. They jumped on that page like wild animals and tore that thing to shreds! It was impressive haha! In hindsight, I should have gone with some more difficult puzzle designs I had in mind, but feared they’d be too difficult. Boy, was I wrong! Haha!

I had actually planned on releasing another MUCH more difficult follow-up puzzle later that week, but I actually had gotten really sick and I didn’t really have the energy to complete its design. 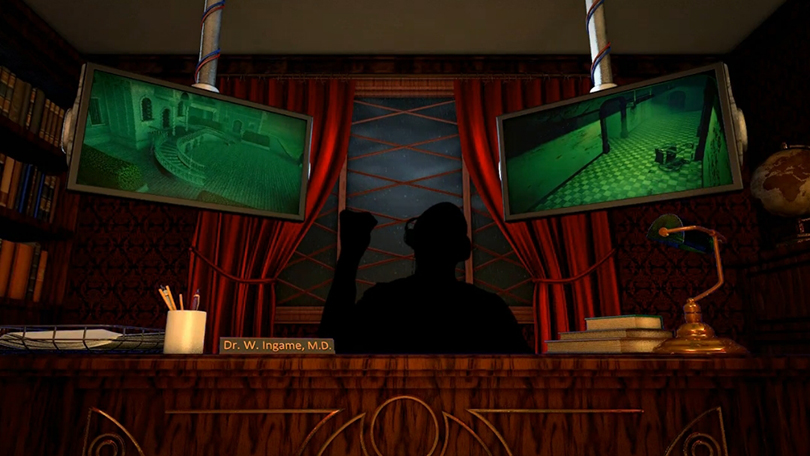 Streamer News: Your new branding is a huge improvement in terms of visuals and overall cohesiveness. Did you know right away what you wanted everything to look like?

IGA: Well I knew it had to blow the old Asylum out of the water, and I wanted it to be something special. It wasn’t until Smaliciouz (the artist of Asylum 2.0) suggested going full 3D that our imaginations started to run off the beaten path. We took time to look at reference photos on the internet, and searching keywords like “Victorian architecture”, “Transylvanian architecture”, “haunted mansions”, and others of the sort. During our back-and-forth, we eventually both, by chance, ended up choosing the exact same image on Google to take inspiration from and development began.

Smaliciouz pretty much designed the entire outer Asylum. I gave my suggestions here and there, but it was mostly him. I knew what I wanted the inner hallway to look like, and I originally wanted the room I sit in to be a security room with tons of monitors everywhere monitoring different rooms of the asylum, but the idea was eventually thrown out because of how complex the idea was. The room was later changed to a doctor’s office.

Streamer News: Branding can be a huge factor in Twitch broadcasting that sets you apart from other communities. How did you decide which designer to use for the rebrand?

IGA: I found Smaliciouz by chance, honestly. I was given access to a particular discord server by a coder friend of mine that just so happened to have a dedicated channel for artists. At the time, I was searching for coders to help me out with another idea I had. At some point, out of curiosity, I started searching the “Artists” channel and stumbled on Smaliciouz’ site/portfolio link and It was pretty impressive. He had worked with large streamers such as Cohh and Bikeman, so I figured he’s got to be good. I messaged him in hopes that he would respond with interest, and he did. The rest is history. 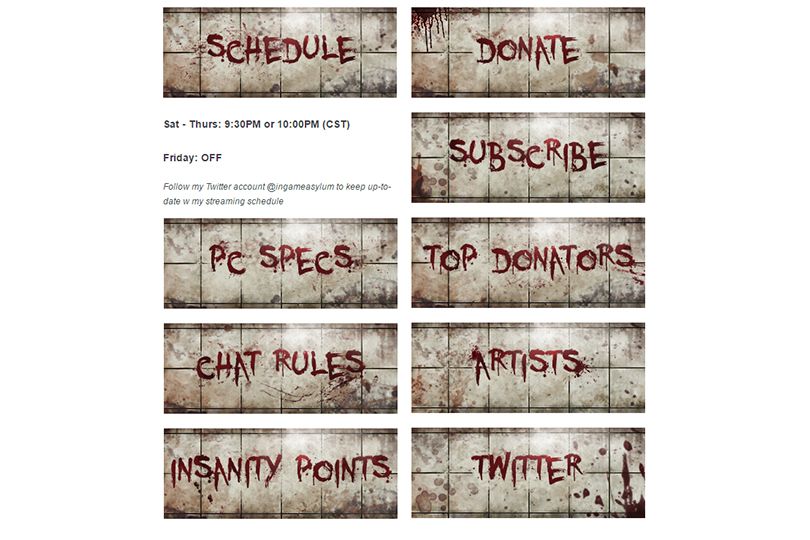 Streamer News: Will you continue to create future puzzles or concepts involving your community?

IGA: I will continue to create content, but will they be puzzles? Probably not. I feel as though once you do something like this, trying to cash-in on repeating the same thing to re-generate hype will only be met with mediocre (at best) results. Gotta keep it fresh! So, who knows what I’ll do next. Right now, I’m just glad the Asylum 2.0 is finally done.

Streamer News: In closing, do you have any additional comments or remarks you would like to say?

IGA: Thanks to everyone that has supported this crazy venture – my community, moderators, Twitch, Streamernews, friends, and family 🙂 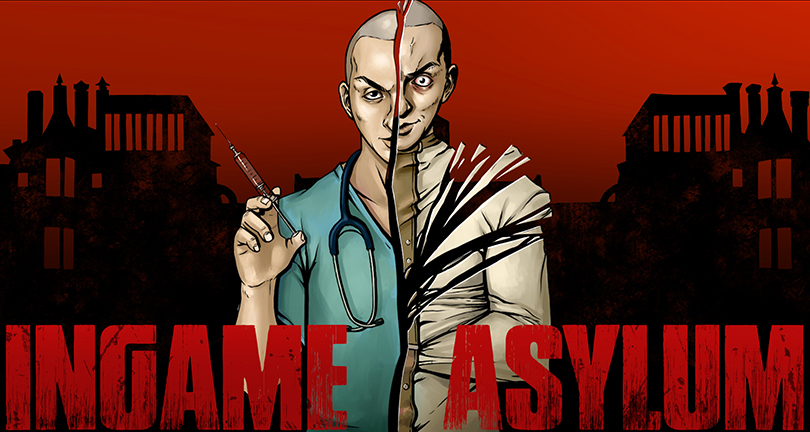