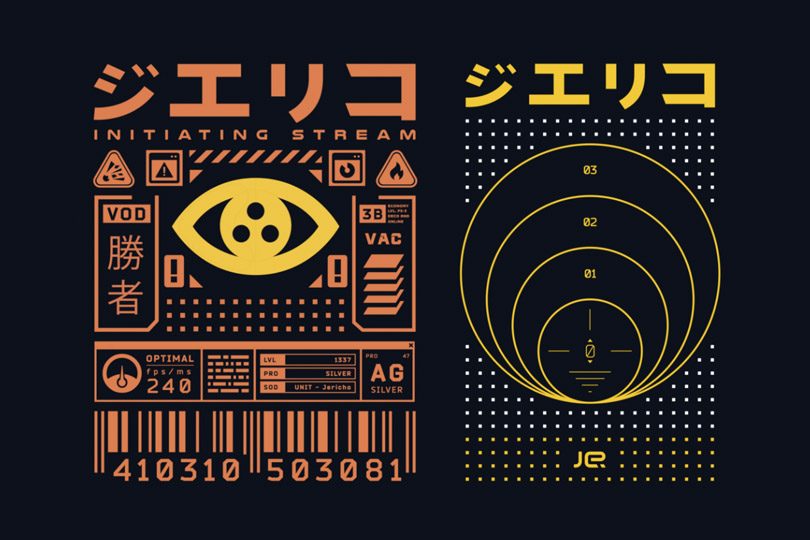 Having merchandise as a Twitch Broadcaster is very beneficial. It allows your community to represent you away from the computer screen, a tangible product.

When we first saw IIJERiiCHOII’s Season 1 “Cyperpunk” collection, we noticed he did not just slap a logo on a t-shirt and retail it for $24. He took his time, brainstormed, and curated what he thought his community would like. IIJERiiCHOII designed a collection that represents the quality of his brand that he has built up for years.

We recently had the chance to talk to Tucker about S1 Cyberpunk collection, how it came about, and what it meant to him to release his first merchandise collection in over five years.

Streamer News: You recently released S1 of your apparel collection on Design by Humans. What was the thought process behind season one?

Tucker: It’s been 5 years since I’ve put out real merch, and that was by choice because I felt there were a few things holding apparel back until recently. The two underlying themes that I wanted to overcome were quality of the product and a design that didn’t suck.

Honestly, people are really content to throw their logo or name on a shirt in plain text and call it a day, or just use a generic design to say “Hey, I like gaming and watching this broadcaster!” and there’s nothing inherently wrong with that. That’s not where I wanted to go with the cyberpunk season that we recently put out. Why settle for the safe bet? That’s no fun.

Streamer News: We couldn’t agree more. We remember you sketching out the designs you had in mind on paper and posted it on your Twitter. How many iterations did you go through until you felt you had the right designs?

Tucker: These designs were in the works for a few months. My designer KeiraArts is great at helping me get my ideas and themes into the finished product we wanted. Basically, I came to him and gave him a couple folders dedicated to design themes you’d find in Cyberpunk/Vaporwave art. Japanese text, greco-roman architecture, UI interfaces; just as many examples of general themes that I wanted to use.

He made 6 general mock designs that we narrowed down to 2 before tearing those apart and taking elements from each one to make what we’ve got now.

Streamer News: The final designs are clearly a hit. It is currently in the top 50 products sold on Design by Humans. What were your initial feelings before releasing S1? Were you worried at all since you haven’t put out merchandise in the past 5 years besides a few limited edition campaign?

Tucker: Hey man, it’s #1 on top 50, don’t sell me short (tongue emoji). No, but I was honestly nervous. Merch is something I’m pretty passionate about and I hate seeing people forced to buy clothing they’ll feel awkward wearing out in public.

Everyone has personal tastes and it was a definite possibility that people would hate the design, or worse, the theme. That said, I’d be lying if I said my design was doing well solely because of the design. I have an awesome viewer base that supports me, so we all know that plays a huge part in how well the merch itself is doing. Like I said, I could release a plain shirt with a logo and I’m sure people would still be happy, even if I wasn’t.

Streamer News: (laughs) You’re right you are in the #1 spot. Our bad! That’s part of the reason why we wanted to discuss your S1 collection. You didn’t just slap a logo on a t-shirt. You took the time and put a lot of thought process into it and the numbers reflect that. Something we wish more broadcasters would do. Will each collection have a theme and be limited?

Tucker: In my head (cause I’ve never done any of this before), I’d like each season to last 3 months and I want to do something special with each launch like the rebranding I did around the Cyberpunk theme.

The next theme is likely CSGO, so perhaps a frag movie, or stickers in the game to match. This is very much a pet project, where I just want to do cool stuff instead of syphoning money from every corner of the internet. If things are going really well with that theme, maybe halfway through I’ll drop another item in there to keep things interesting.

Streamer News: That makes perfect sense. A new collection for every quarter of the year. We like the fact that you re-branded everything from your social media to your Twitch channel to coincide with the launch of your apparel store. In my opinion that makes it more impactful.We look forward to seeing future collections!

Tucker: Thanks dude, appreciate the shout!

Streamer News: IIJERiiCHOII’s Season 1 Cyberpunk collection is currently available on Design by Humans. Click the button below to purchase.