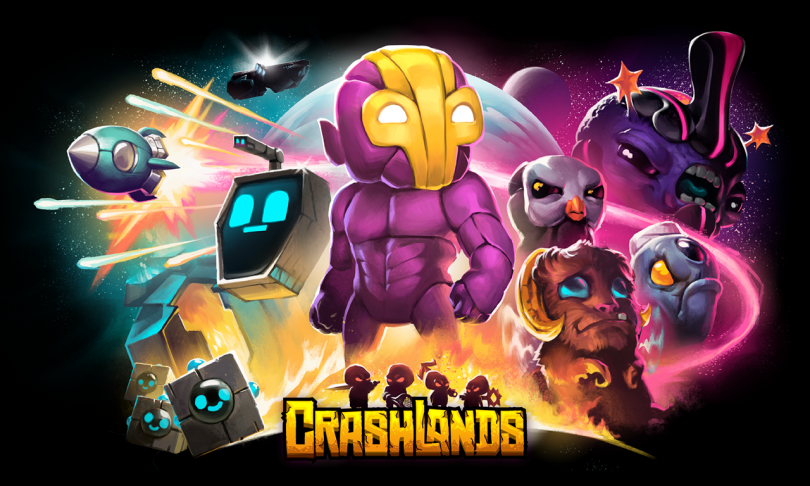 Crashlands saw major success on initial release, having the game seamlessly transition from PC to mobile was a huge feature. We had the opportunity to talk with Butterscotch Shenanigans the game dev company behind Crashlands. Their story is truly inspiring and we hope you appreciate getting to know them as much as we did.

Butterscotch Shenanigans were kind enough to give away 3 keys along with the interview, to enter the contest click the link below.

Streamer News: Hi guys! Could you please give us a little introduction and background of your company?

Samuel Coster: We’re Butterscotch Shenanigans, a 3 brother indie studio based out of St. Louis, MO and Dallas, TX. We make ridiculous games and have been at it for a little over 3 years. Our first games were focused on the mobile market, since it has a lower barrier to entry, and once we got our CHOPS we went big with Crashlands which just recently launched on Steam and mobile simultaneously!

SN: Butterscotch Shenanigans is such a unique name, how did you come up with it? It’s one of those company names you will never forget.

Seth Coster: Back when we were wee lads, we were exploring a cave structure deep in the forest near our home. Sam was trying to pull himself up on a rock, but the rock slipped and he fell into a huge chasm. There, at the bottom, was a glowing, majestic treasure chest with an amber glow. He opened it up and a whisper sparkled through the cave, echoing against the cave walls. That whisper said, “Hey guys, What’s up?” Then later a bunch of other stuff happened, and we made up the name in a car ride. 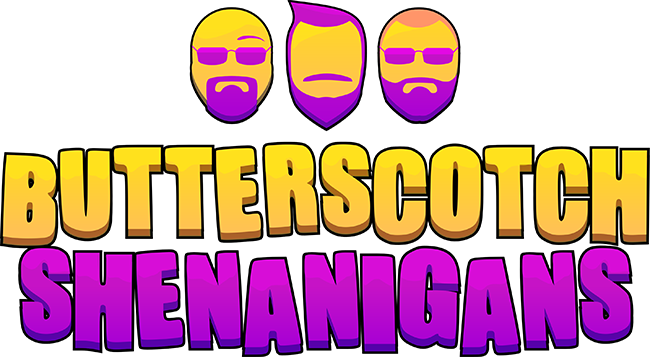 SN: What luck to find a glowing, majestic treasure chest! I never had anything cool like that happen in my childhood. Sadly.

Adam: The perks of growing up in the Iowan wilderness.

Seth: The chest might have stolen Sam’s soul and traded it for a Twix bar, but we’ll never know.

SN: Haha, “Coffee with Butterscotch” is your podcast and you guys sound like you have a ton of fun, while still giving some insight into your lives as game devs.
Why did you guys decide to do a podcast? It’s fantastic to see game developers go out of their way to keep their community both entertained and informed.

Adam: Well, when it comes to making games and building a business that makes games, we have no idea what we’re doing. That means that we make mistakes, but not malicious ones, so we want to be as open with our players as possible. Plus we want other up-and-coming indie devs to have the chance to learn from our mistakes, and get something of a head start. It turns out that doing so in podcast format is WAY more fun than writing articles, and it also gives the three of us a chance to decompress a bit every week.

Seth: We also tried a video format first, but it was far too much editing. Podcasting hits that sweet spot, where it’s easy to create but still lets us have deeper relationships with our players.

SN: Yeah, it’s cool that you guys are open and honest with your community. It makes the company genuine.

Seth: That’s also why we put our three heads on the splash screen. When we were first starting, people would send us these rage-filled emails because maybe we had something like… a free version of the game with a pay to unlock full version… so people would write us emails calling us greedy corporate goons.

We had a sort of “a-ha” moment that if we just made it clear to people that we are human beings who are just trying their best to make cool stuff, the relationship would improve in both directions. SO WE DID!

SN: Let’s start talking about your new hit game, Crashlands. How did you guys come up with the premise of the game? Did the game stay true to your original idea or is it almost entirely different?

Samuel: Crashlands came out of a pretty dark place for us. I got diagnosed with stage 4b cancer shortly after we had our first successful game launched and had a bit of a MELT DOWN (as tends to happen). We were at the stage in our studio where we could make the choice of creating “another” game similar to what was already on the mobile market or strike out and build something wild and huge. Getting my mortality checked at that time helped us make the right decision, to go big, and also brought Adam into the fold once he finished his PhD in molecular biology. His addition to the team was like putting a jet engine on the jalopy that was Seth and I. With the three of us on the project we transformed it from being a sort of bland mishmash of a bunch of our favorite titles (Terraria, Pokémon, Diablo) into something truly unique. And it helped all 3 of us get through all that cancer nonsense, which is nice.

SN: Wow, that’s truly inspiring. It’s pretty amazing how developing this game created a way to escape that and stay positive. You can tell right away that you guys put your heart and soul into the game with how polished it is.

Seth: To add to that, our concept for the game really did change a lot over time. At the beginning, it wasn’t even really a game… it was just a weird place you ran around in, pretty much aimlessly. After Sam came out of his first round of treatments, we kinda stepped back and looked at what we made, and we decided that wasn’t good enough, and we worked to turn it into a more RPG-style game. The story elements weren’t even begun until about 3 months before beta testing started. So yeah, it grew and changed a lot over its dev cycle!

SN: It turned into something special no doubt, the trailer is probably one of the most hilarious we have ever watched (at least 5 times now). How did you come up with it? The script, music and features shown got us hooked almost immediately.

Samuel: Ha! Thanks! We were prepping for our greenlight campaign and wanted to look into how other games were doing their trailers. After going through probably 20 trailers on the greenlight page we realized that all of them had basically the same formula: TITLE SCREEN! guitar riff or heavy metal GAMEPLAY words on screen and that was pretty much it. Lots of cuts and epic music that usually didn’t explain anything about the game or make an impression. It was just another game trailer. So we looked for trailers we actually remembered, one of which was Battleblock Theater. That trailer is so damn hilarious. And when we looked at the catalogue of trailers and how to stand out, the answer became clear – don’t make a conventional trailer! We scripted it out in a morning, headed to our sound guys house and recorded me screaming into a mic for the better part of an hour. The response was more than we could’ve asked for!

SN: I was just about to say the trailer is “Battleblock-esc”, which is a great thing. The trailer met with great response and definitely helped get the word out, so many people sent me the link saying it was one of the best they have seen.

One of the things that struck us was the artstyle, it is so colorful and everything from the terrain to the creatures are highly imaginative and immersive. Did it take awhile for you to finalize how everything would look?

Samuel: We actually just sit down and go when it comes to the art, so there’s not any concepting or much decision making going on. Seth will say “HEY WE NEED AN ENEMY THAT DOES [x]” and then I just whip something up and we call it good. With as many items as they are in the game and just the sheer art-load, it’s actually a bit funny how non-redundant doing the art was. Aside from the environments, which were redone a few times, the majority of things were done once and called good.

SN: Haha, that makes it that much cooler! I love the Wompits.

Something that we caught in the trailer and on our phones is that it is available on both PC and mobile app stores and you can carry over saves across those platforms. Is there anything different about the mobile version?

Seth: Yes… it is much smaller! It fits in your pocket delightfully.

But seriously… it’s exactly the same. We didn’t do the whole “make a port” thing; we just designed the game to play well on both platforms, and then we didn’t have to redesign anything then.

SN: We’d say it’s worth the $20 in total between the two versions. 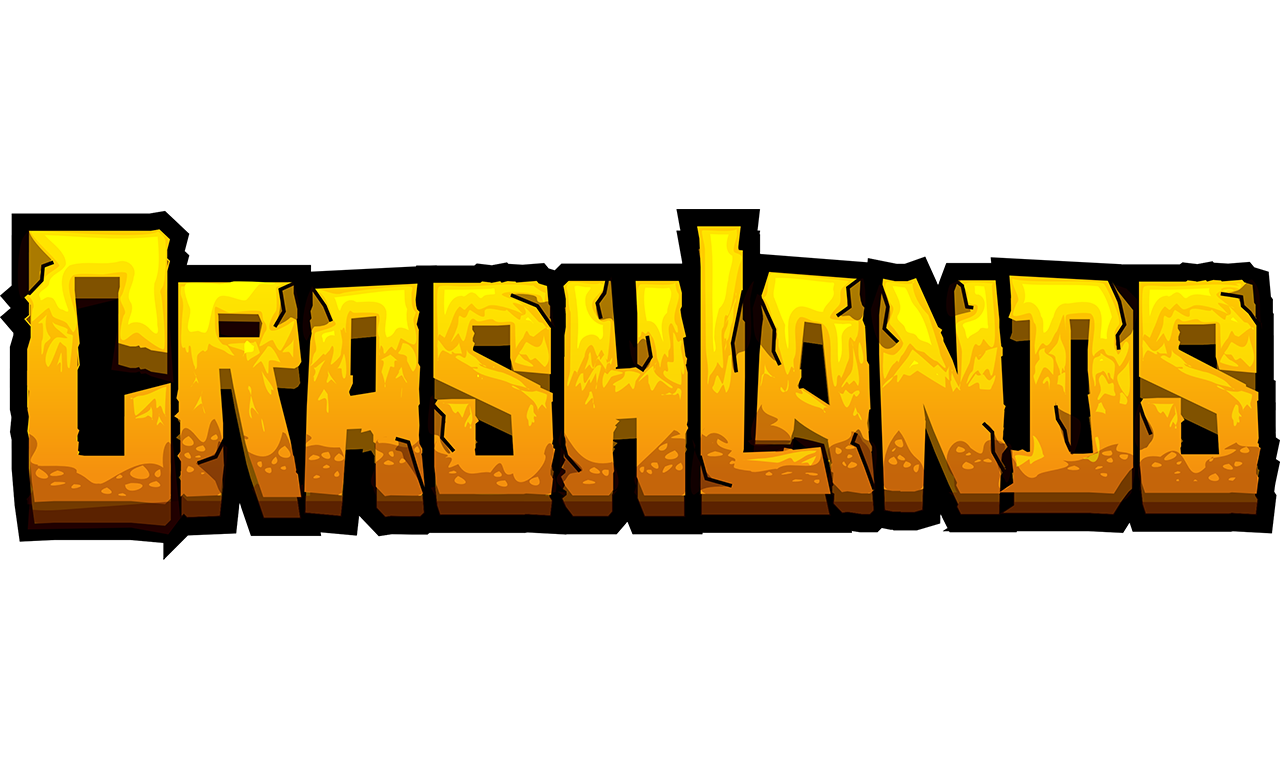 SN: Twitch is constantly growing and everyday there are more and more people trying it out. What do you think of the website? Have any of you ever watched a stream or maybe even tried streaming before?

Samuel: We’ve actually done a bit of dev streaming but it tends to burn us out REALLY fast. Plus now that we have BscotchID and a bunch of proprietary tech on the backend it’s harder to be totally transparent! We don’t actually watch much of twitch aside from some of the bigger event based ones, like Twitch plays X or the Games Done Quick event. Their new additions of creator stuff does raise some interesting opportunities for the future of streamed gamedev, but for us currently it’s a bit too difficult to do effectively.

SN: Since this type of entertainment is still new to the world, some developers may be skeptical about it. Has Twitch and it’s community benefited your game?

Samuel: Definitely. We had a bunch of streamers take to it and play it for their following and really enjoyed popping in to chat with them about the game and be sassy. It was a really fun way to reach new people and all the streamers were really wonderful! I think our biggest one was Bikeman, who had over 1500 people watching at once which was pretty crazy for us to see and interact with.

SN: Bike is one of the most entertaining broadcasters on Twitch, we feel he always breaks the the new indie games out to the community.

What’s in store for the future of Butterscotch Shenanigans? Is there a new game in the pipeline?

Samuel: We’ve got a few cool content patches coming for Crashlands, including the Quality of Life patch and the Creator, which will basically turn further development over to the community at large. Then it’ll be on to the next game, which we can’t say much about yet 🙂

SN: When can the community expect the patch to release? WIll it be sometime in the near future?

Samuel: The quality of life patch isn’t too far out, but the Creator’s launch day is under wraps for now!

SN: Awesome. We will be sure to keep an eye out for it! Thank you guys for your time, if there are any shoutouts you’d like to do. Please do so now.

Samuel: Huge thanks to our wives, our family, our fans, and the St. Louis Game Dev community!

Seth: I’d like to just generally shout out. WOOOOOOOOOOOO!