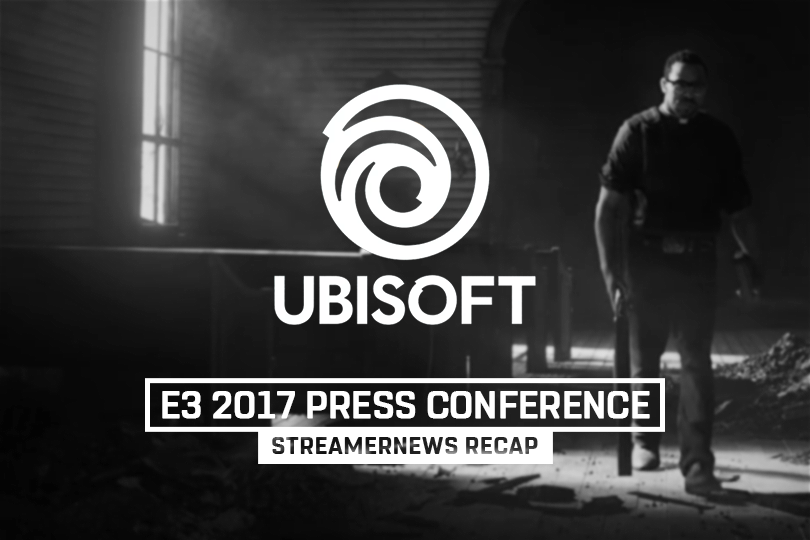 Starting off the show, in an surprise move we saw Mario creator Shigeru Miyamoto come to the stage with Ubisoft CEO Yves Guillemot to show off the Nintendo Switch’s new Ubisoft exclusive which is officially titled Mario + Rabbids Kingdom Battle. It heavily resembled a Mario-themed XCom and will come out this year on August 29th.

The game has been in development since Black Flag came out, and will tell the origin tale of the Assassins in Ancient Egypt. A trailer plays showing different environments, wildlife, boats and horses, and eventually some combat. The game will be releasing on October 27th on PC, Xbox One and PlayStation 4.

South Park: The Fractured But Whole

The game will be out on October 17th and stars a super hero theme. The gang’s vulgar banter again takes a center stage.

Elijah Wood made an appearance during the press conference. The actor played the creative director on an upcoming VR game. The game is titled Transference, and the story seems to take place after scientists discover the ability to upload a recorded consciousness of someone, and you enter into that person’s consciousness. Coming Spring 2018.

It’s a great year for pirate games! Brand new IP being developed by Ubisoft Singapore. Skull & Bones is a multiplayer naval combat game. The PvP game’s combat looks very similar to the naval combat in past Ubisoft’s games like Assassin’s Creed: Black Flag. However, in this game, you can link up with a team and battle other crews. Shown was a 5 vs 5 match. Each person in the fleet controlled a different ship in the demo, and each ship performed a different role with different strengths.

Just Dance 2018 will be out October 2017 for “all consoles”. Yes, including the Wii U apparently.

We’re not sure what the game includes, other than Cowboys and Indians.

Starlink seems to be a space-combat game, but you build a spaceship in real life and attach it to your controller. This gives you the ability to modify your ship on the fly while playing by attaching and removing different pieces from your real-life spaceship. Amiibos?

Steep: Road to the Olympics

The video opened in a church in which armed citizens raised their guns as they sang Amazing Grace. And it sort of descended into violent chaos after that.

The game also mentioned again that co-op will be available in Far Cry 5, and you can even play the entire game in co-op. Far Cry 5 comes out next year on February 27th.

Beyond Good and Evil 2

DJWheat was finally vindicated. It’s been 9 years since the announcement trailer, the original game was played on the Xbox, Game Cube, and PlayStation 2 but we are finally going to be playing Beyond Good and Evil 2, the upcoming sequel will actually take place before the original game. Michel Ancel, creator of Beyond Good and Evil and Rayman, came to the stage in tears to show off the new game.

Stick here on Streamer News for all the recaps from E3!