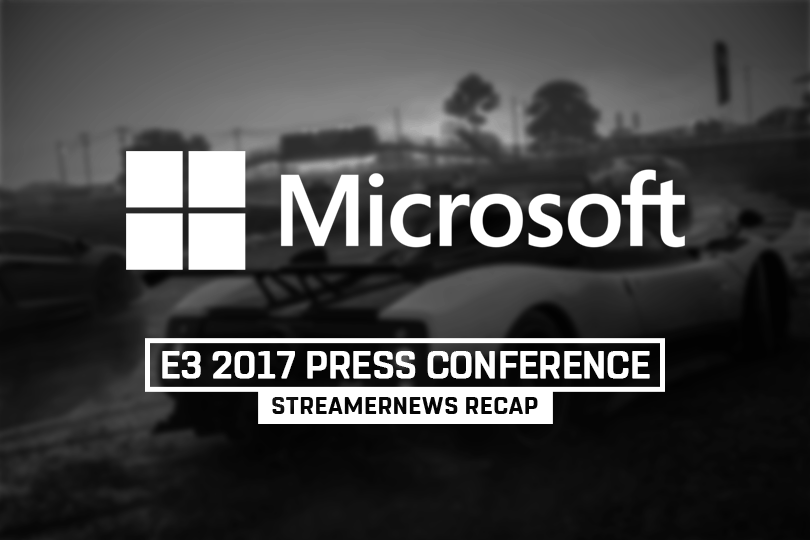 Microsoft had a strong presence at its E3 2017 press conference, showing off the Xbox One X (formerly the Project Scorpio), as well as a jaw-dropping 42 different games on stage, announcing backwards compatibility for the original Xbox, and showcasing gameplay footage for upcoming games like Assassin’s Creed Origins, Forza Motorsport 7, and Bioware’s Anthem. If you missed the show, here’s a recap of what Microsoft showed off for the Xbox One:

Xbox One X is the new high-end Xbox console

The specs are indeed impressive, with a 6 Teraflop GPU, 12 GB of GDRS Memory and 325 GB of memory bandwidth announced. All of this leads to 4k UHD Blu-Ray Playback, HDR graphics, and it’s the slimmest Xbox ever to boot.

Compatibility was important to the Xbox team as well, which lead to the game libraries of the Xbox One working on the Xbox One X, with improvements to them like faster runtimes and higher fidelity to players. Also announced was backwards compatibility with some original Xbox games. Also, supersampling, a new tech that will lead to the most graphically impressive console games out on the market without a 4K TV.

There was a 2018 Porsche 9-11 GT2 RS on stage. This “flagship supercar” was just one of over 700 cars at 60 fps in 4K that they planned to show us. Along with the super high-res textures that Forza is known for, we also got a good look at the insane weather effects and nuanced lighting that the game will be bringing us soon. Launches worldwide as an Xbox Play Anywhere title in October 2017.

The Metro series offers up all the gritty, post-apocalyptic FPS action you could ask for, so it’s nice to see footage of the new sequel, Metro Exodus, showing off its rubble-filled wasteland looking better – and scarier – than ever. Metro Exodus will be coming to PC, Xbox One, and PlayStation 4 sometime in 2018.

The next sequel in Ubisoft’s long-running series is Assassin’s Creed Origins, set in ancient Egypt. The era of Pharaohs and kings look gorgeous, with colossal stone statues, shining pyramids, royal gardens, and even some glimpses of supernatural elements like a battle against a giant snake.

Available October 27. We’ll be sure to see more of Assassin’s Creed Origins during Ubisoft’s press conference.

Game creator Brendan Greene announced the news in person, and, unsurprisingly, he pegged it as an Xbox One console exclusive.

The game will see a formal release “later this year” on the Xbox line of consoles, and Greene confirmed that it will receive Xbox One X-specific enhancements, though he didn’t clarify exactly what those would be. As a nice hat-tip to series fans, the game’s console-launch trailer ended with one player getting whacked by the game’s most powerful item, a frying pan.

Looks like a 4-player co-op game which featured a bunch of dwarfs delving into a dark cave and fighting their way out with guns and explosives.

“State of Decay 2” is a zombie survival game, where you build a community in an open world filled with zombies, human enemies and the gear necessary to keep your community alive. Play solo or invite up to three friends in multiplayer co-op. Available worldwide as an Xbox Play Anywhere title in spring 2018.

The game is an 8 player battle royale arena styled game. 7 of the players will be directly fighting with each other, while the eighth player will play as the game’s show director. He can watch the games from a drone, dropping items for other players, causing mutants to attack, or reveal a player’s location temporarily. While they didn’t give much details on it, games can also be livestreamed and the viewers can help shape the events that happen to the players as well.

While characters will be battling each other in The Darwin Experience, they will also need to survive against the elements. Ice and frostbite may get you as easily as another player.

The Darwin Project is being developed by Scavengers Studios and is coming to the Xbox One and PC in Spring of 2018.

Minecraft is uniting the global Minecraft community across mobile, VR, Windows 10 PCs and all consoles under one roof. It will also receive a free 4k update, with sort of a fresh look at Minecraft, showing dynamic lighting and improved graphics. The “Super Duper Graphics Pack” makes the game look more impressive on 4K ultra screens.

A 2-d fighting game in the same vein as Marvel Vs Capcom. The game is scheduled for release early next year on PC, PlayStation 4, and Xbox One. Publisher Bandai Namco hopes to run a closed beta on consoles “before the end of summer.”

Black Desert has been out for for some time now on PC, but it is know as Black Desert Online on PC. On Xbox, it is expected to be mostly the same game, but optimized for Xbox. It was developed by the Korean studio Pearl Abyss.

A sweeping cyberpunk adventure with a captivating visual style, blending pixel-art voxels and high-tech cityscapes. Sort of like a pixelated Blade Runner.

Annapurna Interactive showed off the charming cartoon style of The Artful Escape, which transitioned with an ordinary city street, into a rock opera sidescroller loaded with psychadelic visuals.

Anime Dark Souls. What Microsoft had to say:
“Code Vein is coming to PS4, XB1 and PC in 2018! In the not too distant future, a mysterious disaster has brought collapse to the world as we know it. Towering skyscrapers, once symbols of prosperity, are now lifeless graves of humanity’s past pierced by the Thorns of Judgment. At the center of the destruction lies a hidden society of Revenants called Vein. This final stronghold is where the remaining few fight to survive, blessed with Gifts of power in exchange for their memories and a thirst for blood. Give into the bloodlust fully and risk becoming one of the Lost, fiendish ghouls devoid of any remaining humanity.”

What we saw was a live-action Crackdown 3 ad starring the charming, lovable, muscular Terry Crews. Which won us over immediately. Crackdown 3 is coming November 7, 2017

Developed by Rare, the legendary creators of “Perfect Dark” and “Banjo-Kazooie,” “Sea of Thieves” is an immersive, shared-world adventure game filled with pirates, unexpected dangers and loot for the taking. Explore, fight and live the pirate life together in a unique co-op experience that combines the thrill of adventuring together with friends with the unpredictability of a shared ocean and its threats, both from other players and the world itself. Available worldwide as an Xbox Play Anywhere title in early 2018.

Ori and the Will of the Wisps

We heard they gave out Ori-branded tissues when they showed this title off, and the original was one of the few games that almost universally brings out the feelings. Embark on an all-new adventure to discover the mysteries beyond the forest of Nibel, uncover the hidden truths of those lost and unravel Ori’s true destiny.

A futuristic first-person space game of some kind that will release on August 2nd.

Lucky’s Tale, developed by Playful, was originally published by Oculus as a launch title for the Oculus Rift virtual reality headset. The platformer seems similar to Nintendo 64-era games with its cheerful design and colorful environments, and also used virtual reality features like head tracking as game mechanics. Super Lucky’s Tale is due out on Nov. 7 for Xbox One and Windows 10.

None of the playable characters have any eyes, noses or any facial features other than the amazing mustaches which can be found on one of the starring heroes of the trailer. This game looks like it could be interesting as a co-op experience.

Life is Strange: Before the Storm

Before the Storm looks to be a prequel to Life is Strange, featuring teenage versions of the main characters Rachel and Chloe. The first episode of the new Life is Strange arc will debut on August 31st.

Bruz the Chopper, aka the Sassy Orc, won the day. Pretty sure it was the same guy as Bruce the Shark. Shadow of War will launch on October 10 with enhanced 4k Ultra HD and HDR support on the Xbox One X.

Anthem looks like a mix between Destiny and Horizon: Zero Dawn. The armor, jetpacks, and wide array of weapons and loadouts have us thinking that this will be a hit when it arrives in 2018.

It was a long one! But stick with us here at Streamer News as we bring you all the new titles as they’re announced!