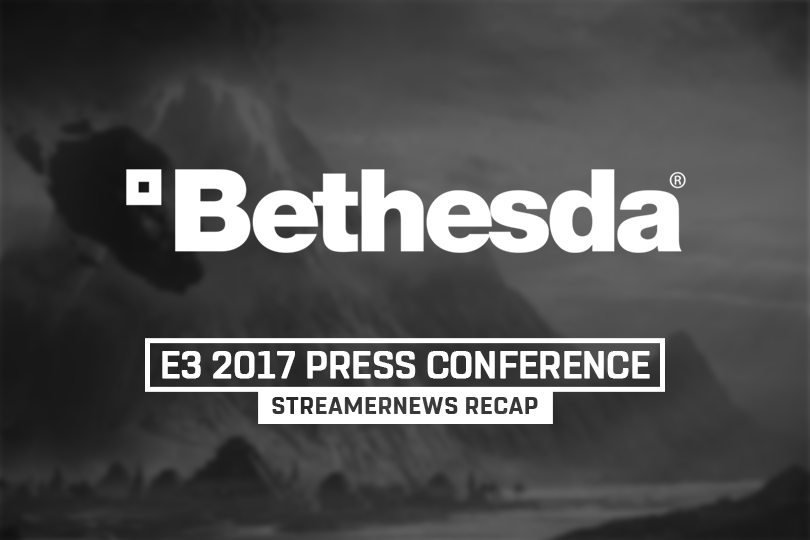 Sort of a short and underwhelming conference, but here’s the highlights:

Got to hear from the kids and developers at Bethesda about what they’re doing and working on. Also got a recap of Fallout 4, Prey, and Dishonored 2. The theme is “Bethesdaland”.

Next up, for the HTC Vive and PSVR is Doom VFR. In this trailer we see players getting to take on enemies teleporting around as the locomotion style. Fallout 4 VR is the next to be shown off, unlike Doom this seems to be a more one to one conversion including getting to pull up your own hand to view your Pipboy and firing weapons by hand. Fallout VR will release on the HTC Vive this October.

This was perhaps the highlight for us. BJ Blazkowicz is back in Wolfenstein II: The New Colossus. . The sequel to the critically acclaimed shooter from award-winning studio MachineGames was announced at the Bethesda E3 2017 showcase, and will be available on October 27, 2017, on Xbox One, PlayStation 4 and PC

Dishonored: Death of the Outsider

Developed by Arkane Studios, Dishonored: Death of the Outsider is the first standalone adventure in the Dishonored series.

From Tango Gameworks and horror mastermind Shinji Mikami comes The Evil Within 2, the sequel to the 2014 survival horror game. In order to save Lily – the daughter he believed he lost years ago – Sebastian will have to step into the madness once again. The Evil Within 2 will launch worldwide on PlayStation 4, Xbox One and PC on Friday the 13th in October 2017.

Yes, still. Skyrim on the Nintendo Switch seems to include Amiibo support.

Paid mods. Creation Club is a collection of content created by Bethesda Game Studios and outside development partners is curated and compatible with the main games and all their official add-ons.

With the Closed Beta now open 24/7, they’re now ramping up the “esports” talk. Quake World Championships was announced, with a prize pool of a million dollars.

Heroes of Skyrim adds more than 150 new cards to the base game.

The Elder Scrolls Online: Morrowind has recently launched, but ZeniMax Online Studios announced two new DLC adventures, as well as free updates, all of which will be available later this year.

More coming tomorrow! Watch our Twitter for gifs and news from the PC Gamer show, Ubisoft, and Playstation conferences.