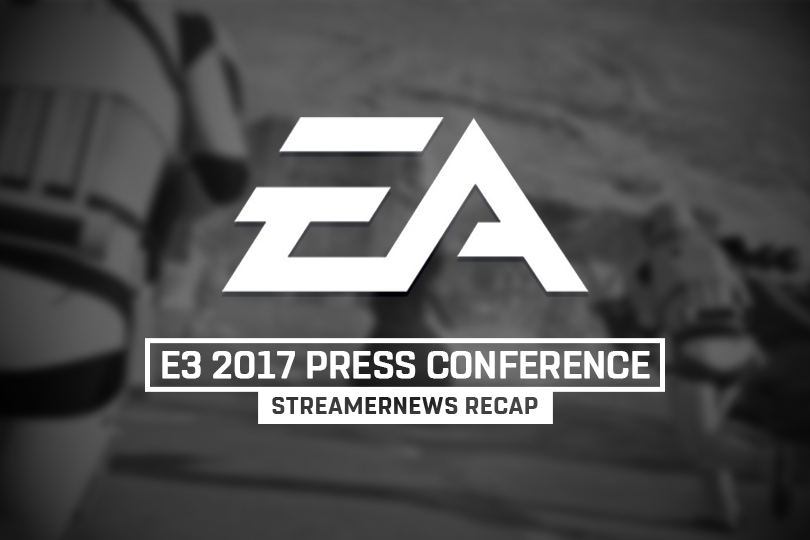 Electronic Arts held their E3 Press Conference a few minutes ago where we heard news about their upcoming titles such as Madden NFL 18, FIFA 18, Star Wars Battlefront II, and a brand new title called Anthem from Bioware.

Was a fair press conference, but the emphasis on sports, the audio issues, and a couple of unrehearsed things that went awkwardly still left some to be desired.

EA kicked off E3 2017 with a trailer for Madden Longshot, an interactive new career/campaign mode for Madden GOAT Edition this fall that looks to take its cue from Friday Night Lights and will star Mahershala Ali. Yet another story mode for a sports title.

After an introduction from CEO Andrew Wilson, DICE took the stage with its latest expansion for Battlefield 1 entitled “In the Name of the Czar” – an expansion which will focus on the Russian front of World War 1. “Czar” will feature six new multiplayer maps, night maps, and the Women’s Kill Battalion. DICE also announced that they’ve heard player requests and will debut a new, smaller, more competitive title in the Battlefield franchise at Gamescom in August.

Next, came FIFA ’18, and we sort of glazed over a bit. Sorry, just not huge FIFA fans. Christian Ronaldo will be providing motion capture to more accurately portray athlete movements on the field. Saw more with the storyline, as they also featured in FIFA 17.

Need For Speed Payback was up next. Looked to be part Fast and Furious and part Burnout. From the second the gameplay started, the graphics were gorgeous and the narrative emphasis was immediately noticeable. The gameplay blended small cutscenes and open world driving seamlessly, even switching between the two main characters shown.

Patrick Soderlund returned to discuss EA Originals. There are several new titles in development, one of which being A Way Out, by Hazelight. Josef Fares (writer and director at Hazelight) took the stage to discuss A Way Out. It is a story-driven, co-op ONLY game, to be played in split screen. It will release early in 2018.

Bioware’s IP was next revealed in a short video tease, to be revealed fully at the Microsoft press conference. Titled Anthem, the title looked to take place in a jungle and featured robotic suits that bear a striking resemblance to Activision’s Destiny franchise.

Sean O’Brien took the stage to introduce NBA Live 18. Two modes were discussed: The One, and The Streets.

EA’s time wrapped up with a full half hour of Star Wars Battlefront 2 and showcased the first glimpses of the campaign. It was explained that the campaign is meant to bridge the gap between Return of the Jedi and The Force Awakens. Couch Co-op was announced to come back, more heroes were officially brought into the game, and a class system was revealed in the opening segment. Battlefront 2’s gameplay was gorgeous and fluid on the streets of Theed, Naboo’s capital. Other locations shown included StarKiller Base, Yavin 4, Takadona, and an Asteroid Belt. We also were given the first look at Darth Maul, Yoda, Rey, and Kylo Ren. John Boyega made a special announcement that Finn and Captain Phasma will be part of the first ‘season’ of DLC along with new planet Crete from The Last Jedi. All DLC was confirmed to be free and multiplayer appears to follow content additions similar to Titanfall 2.

The final few minutes of the conference was a live demo of Battlefront 2 which showcased the different classes, vehicles, and objective-based gameplay.

Catch us tomorrow as we bring you more E3 coverage as it happens!