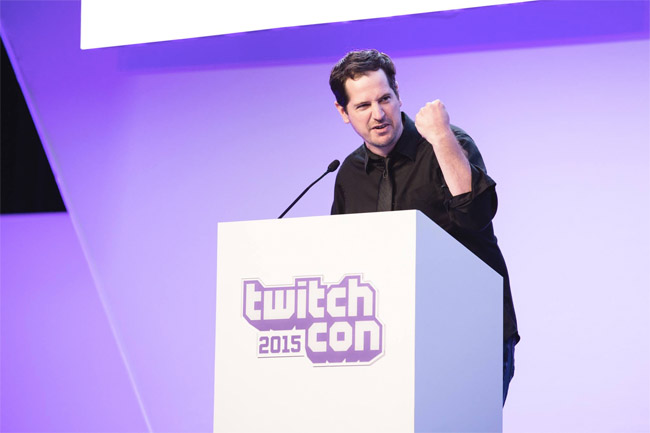 If you have not had the opportunity to catch the SourKoolAidShow, then it is my great pleasure to introduce you to one of the most unique experiences on Twitch.

Host Dan Paul describes the channel as a comedy gaming show with RPG elements and an abundance of booze. If that hasn’t piqued your interest, perhaps the incredible guests such as Andrew WK or his Roasts of Ezekiel_III and Spamfish will bring you to the sour side!

I met Dan Paul in his hotel lobby with a group of mods, viewers, and streamers. Dan Paul is as casual and charming as he is on his show. As we sat down, I expected to learn more about how the show became what it is today – a live, interactive stand-up comedy club and roll play arena. I was surprised that this guy is actually kind of brilliant.

Streamer News: Will DP ever go back to stand-up?

Nah,I am a family man now. Though I have 15 years of stand up under my belt, being on the road or away at clubs and bars isn’t conducive to a guy with a wife and two kids. That’s where Twitch comes into play so perfectly. I bring the comedians to me by hosting the show in my garage and everyone gets to watch a solid night of comedy without leaving the house!

Streamer News: Will there be another Party Sour with Andrew WK?

Yes! He’s agreed to do a show every year. The first one was such a huge success, we had to make sure it was annual.

Streamer News: What was the  biggest challenge with SourKoolAidShow?

The very first solo stream after Shawn (original co-host of the show) left the stream. I didn’t know how to switch scenes! And how do we go to break? It was a difficult transition, but eventually I got the hang of it, and it smooth sailing from here on out.

Streamer News: How much time off-camera do you spend prepping D&D?

That’s a hard question because I live in those worlds. Those characters mean a lot to me. It’s hard to measure how much time goes into that. Our group was mixed – some played regularly and others have never played once. It’s important to me that everyone understands the game and of course has fun while they are playing it.

Streamer News: How much did you play before the stream?

We used to play from 11:00PM at night until 7:00AM in the morning! We would roll play all night by candlelight. I had a whole system! Soundtracks to every room, some of the best times of my life have been playing D&D. We were all drama, theater dudes. We really PLAYED the characters.

Streamer News: What influences or inspires your D&D stories?

I am an emotional, passionate person so the things that inspire me are music, poetry..I’m impressionable. When I read or experience art, like a movie, or music, or something where I can just feel stuff, that’s what shapes D&D. For me, I get those feelings I can express and I can think “Why? Why does the character feel that way?” So I start to write or make up in my imagination how that happens. Even in real life, I take the bad feelings or the good feelings that I experience and I take it in, even its bad, even if it hurts. So I’ll experience those feelings again through a character and just force the chat and the players deal with it.

I want to introduce a world of real feelings because that’s where my inspiration comes from. Feelings. It’s my relationship with everyone I meet, it’s what I experience through film or music. Those are my inspirations.

We all look for inspiration, we’re looking for answers and truth, we’re trying to find where we belong in the universe. There’s so much opportunity for that in D&D, to get a part of you out that needs to reach out and grow. You do that in fantasy and then you bring it back to real life, and you’re wiser, you’re smarter.

Streamer News: What roll does comedy play in your D&D casts?

Fantasy and comedy are the same thing to me. They’re both escapisms. They’re both married together. That’s why I do both. It’s a way to get away. When you’re a comedian or actor you listen, you observe, and you watch everything. You take everything in, and most importantly you grow.

Streamer News: Thank you Dan Paul for sitting down and sharing your drinks.