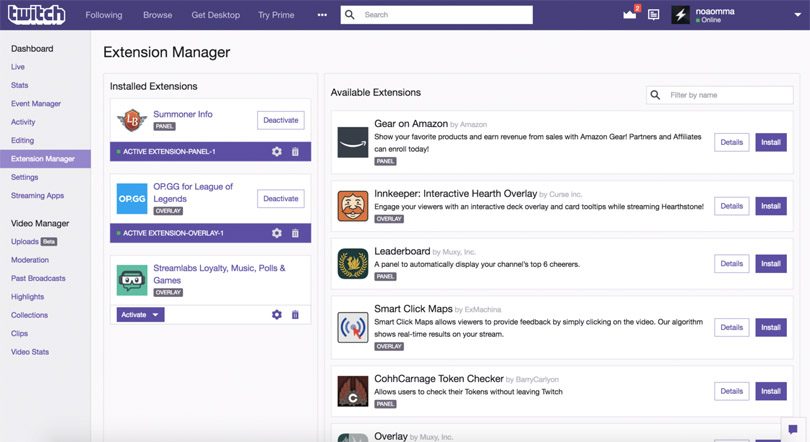 During the Twitch Dev conference, Twitch introduced Extensions. A brand new suite of tools that empowers you to make your channel more interactive than ever before. Built by the community, for the community, Twitch Extensions bring a new world of live apps to live streaming.

Introducing Extensions from Twitch on Vimeo.

Extensions are interactive video overlays and panels that are directly integrated with your live stream. With Extensions, your viewers can interact with you, each other, or the game you’re playing in ways that were never thought possible.

For example, you can add Extensions that allow viewers to mouse over Hearthstone cards directly on the game board to see card details, collectively vote for your next move in real-time, check out the gear you’re sporting, or even take care of virtual pets all from your channel page. And this is only the beginning of what Extensions can do. Third party developers are already hard at work on all kinds of fun Extensions so you can expect to see more and more available over the coming months from names you already know and trust.

We’ve already seen unprecedented levels of engagement with Extensions. Earlier in May, we started to test a few of them, and the response from streamers and viewers was incredible, confirming that Extensions are a great way to engage your audience and keep them coming back for more.

Check out the full list of Extensions coming soon — and soon you’ll be able to install and activate these directly from the Extension Manager in your broadcaster dashboard.

A few Extensions on the way