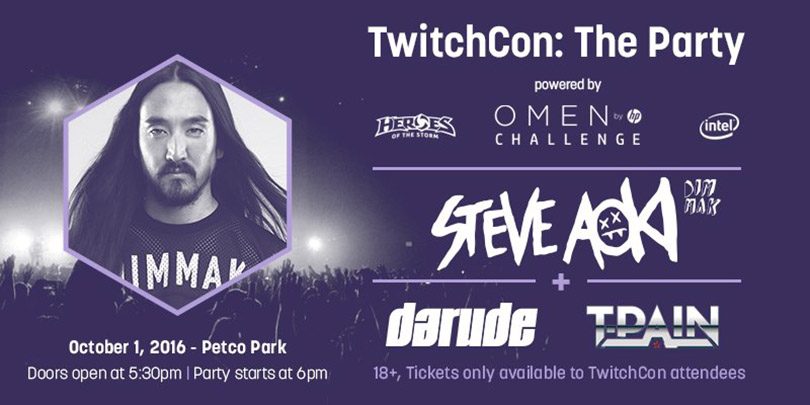 TwitchCon 2016 is less than two weeks away and the hype is building. Earlier this afternoon Twitch released a huge update including the headlining act for TwitchCon 2016, Bob Ross paint-along, and more!

Check out the full update below.

Dim Mak’s Steve Aoki will be headlining TwitchCon: The Party this year! He’s joining the stacked roster of Darude and T-Pain for what will be an incredible night of music at Petco Park.

The Party is kicking off with the HP ‘Heroes of the Storm’ OMEN Challenge and doors open at 5:30pm. If you haven’t bought the add-on for The Party yet, tickets are still available to TwitchCon badge holders by clicking here.

There are a ton of games that will be played throughout the course of the weekend, the schedule is as follows: (all times PDT)

Saturday 10/1 12pm: RuneScape: Battle Mode Tournament finals will crown its 2016 champion. After three months of battling in RuneScape’s current season of Deadman Mode, the top competitors will face off in a final hour involving up to 2,000 players with one taking home $10,000.

Sunday, 10/2 11am: Daybreak’s H1Z1 Invitational concludes after months of competitions. Last year’s Invitational was the talk of TwitchCon 2015, so you won’t want to miss this one. The prize pool is currently over $191,000 and climbing.

For all you esports fans Twitch has set up an esports Viewing Lounge where you can relax and watch events like the LCS World Championship, ESL One New York, Overwatch World Cup, and more.

TwitchCon is also celebrating the magic of Bob Ross, and Twitch has partnered with the Bob Ross Company for something special. On Sunday, October 2 at 10:30 am there will be a Bob Ross Paint-Along. Pre-sale Tickets are available for $99 at www.bobross.com/twitchclass and come with a painter starter kit (which includes canvas and paint for multiple works). If you are not attending the show get your paint kits ordered and join the Bob Ross Paint-Along as well as the multiple other sessions all weekend long on the Bob Ross Twitch Channel.

This is an area designed to give attendees a chance to connect with organizations that help make Twitch a welcoming place. Featured exhibitors include AnyKey, Hack Harassment, Online SOS, and I Need Diverse Games. Visitors can learn about their initiatives and meet guest streamers that are raising awareness of different causes. It will also host a tournament presented by Smash Sisters. Attendees are invited to network with Inclusivity agents, or host their own small meetups in this area.

TwitchQuest is a convention-wide scavenger hunt that will kick off via the TwitchCon app. TwitchQuest is an interactive, story-driven experience that will send attendees across the show floor solving riddles, meeting Twitch employees, visiting various booths to play game demos, and scanning QR codes. Upon completing your various challenges, you’ll have chances to win swag, Bits, or a grand prize trip to TwitchCon 2017! There will also be some side quests with TwitchCon partners.

In addition to streaming all the content for every TwitchCon panel, Twitch has also set up streamer pods on the show floor so Twitch Partners can stream from their own channels to fans and community members who were unable to attend the show. There will also be an international portion, with streamers from a different global region featured each day. Check out the full schedule by clicking here.

In partnership with Amazon, Twitch is holding a special Amazon Game Studios Unboxing Event & Afterparty on the night before TwitchCon. Attendees will get a first look at some of the games Amazon’s been working on, and especially their first release, Breakaway. All TwitchCon 2016 attendees are invited to attend. The event starts at 6:00 pm (doors open at 5:30 pm) on Thursday, September 29 at the San Diego Symphony Hall. RSVP here.