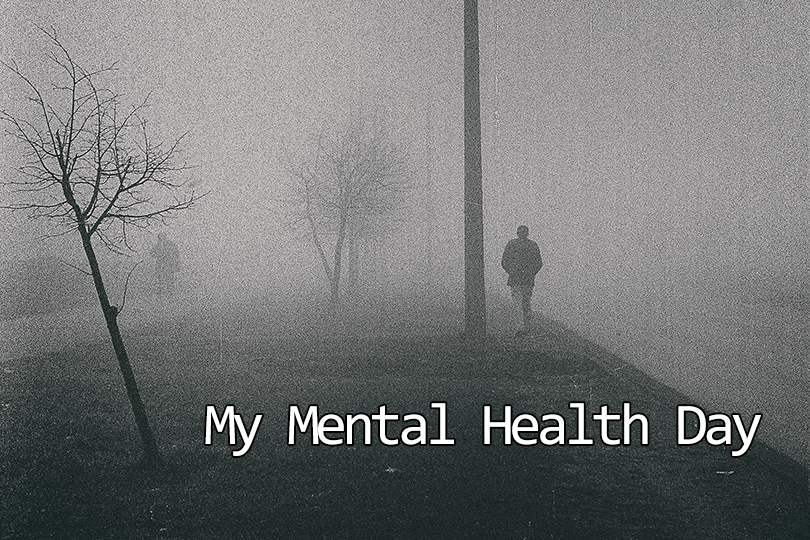 It took me a long time to acknowledge the word…

It was a dirty word when I was growing up. A weakness. Something you should just “man up” and deal with. Something that showed everyone that you didn’t have enough faith, strength, or intelligence to live like a “normal” human.

“Why do you have to be sad? Cheer up, the sun is shining. Maybe you should pray about it. Get over it; you have work to do”

It took years of squelching the scars and swallowing the bitter pills of anxiety before I saw that it wasn’t just hurting myself to hide it, but it was affecting my wife and future family too.

My wife. My poor wife. She’d struggled with depression since early on. She went on antidepressants at the tender age of 14. I think that’s why she saw it so clearly in me too.

I thought I hid it pretty well. And for years, I probably did a pretty good job. When the darkness set in, I’d slip away and lock myself in a room and play music until I could be social again. Later on, I would use anxiety as fuel my accomplishment of things in breakneck speed.

“Push it down. Show no emotion. Do what you’re good at. You don’t need anyone. Get back on track.”

And that worked. Usually. A death in the family or the loss of a job and it’d send me into a tailspin that would take a long time to climb back out of. But I made it work.

But the older you get, the more the bad habits start to actually be your definition as a person. It doesn’t take very many years of denial, self-inflicted abuse, and antisocial behavior before you are someone you didn’t mean to become.

“Just promise me you’ll talk to the doctor”,

she said. I hated that. I hate doctors. I hate being vulnerable. I don’t want your help. I’ve never needed anyone’s help before. Just let me deal with it my way.

But I knew we wanted to have a son soon. Yes, son. Somehow my wife and I always referred to our future child as a son and never doubted it for a second. So it got me thinking…

It’s one thing to hurt myself by my antisocial, silent behavior. It’s another to treat a family to that silence and distance. What if I’m not there for him? My father was rarely there for me. Do I continue the cycle of being stand-offish and being afraid of my feelings? Or do I talk to this doctor. In that moment, I would have rather crawled on broken glass than talk to that doctor about my failures as a functional person.

I want you to know that depression is fairly common, especially among content creators. It’s not a weakness. It’s closer to a disease. It’s a chemical deficiency.

And sure, there are ways you can naturally help yourself deal with it. Proper eating and sleeping patterns. Healthy relationships. Being physically active and fit. Studies have shown that even an hour of working out a week will help you feel much better mentally.

But there’s also a genetic and medical side to this which can’t really be so easily dealt with, especially not by me. I’m certainly not an expert in the field and that’s a discussion for a doctor.

But how many broadcasters suffer from some form of depression or anxiety, do you think? I’d love a study about that. Such a new field that I guess it’ll be awhile before it’s really looked at in-depth. Someone will do that study in the next 5 years.

But I know they’ve studied comedians. There are so many well-documented and discussed cases of “sad clowns” or the comedians who make others laugh but are secretly among the worst sufferers of depression and mental illness.  We’ve lost so many great comedians to suicide and overdose.

What I want from you is this: recognize it in yourself, do things which help you cope, and seek help from others if you need it. It’s okay to not be ok. Depression is not a sign of failure.

I also want to destigmatize it a bit. Why can’t we talk about it the way we can talk about other illnesses? So many of us, like myself, have suffered in silence for so long. What are we so afraid of by talking about it? Mental health is just as important as physical health, if not more so.

I went in the other day for my first annual check up on the depression medication I’m on. I wouldn’t say I’m proud of that. But I am not hiding it anymore, either. My wife says I’ve done much better since going this route. Which is good because I want to be there for my son. And I want to be there for you, my friends, when you suffer too. Let’s lift each other up and be well.

How has depression affected you and those around you?