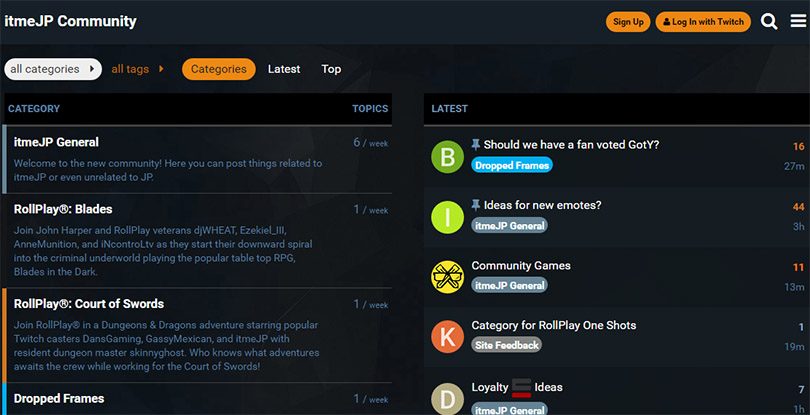 itmeJP has officially launched a new community portal on his website.

Now when you visit his website and head over to the community portal you will be greeted by a message board for his community. You can look for topics based on categories, upload date, and popularity.

If you are interested in partaking in a discussion, you can either sign up or log in with Twitch. Keep in mind that he shut down his subreddit and this will now be the main way to connect with his community.

Shout out to Daniel from LiveSpace for creating and innovating the new community portal. He made an official statement on what the purpose of the community portal was, read it below.

We decided that to be able to move forward we need to connect with the audience but also let the audience connect with each other. This is a more natural and free-flowing way than using a one-topic/interest based subreddit.

Now the audience can, and already has, talk about everything from gaming to food. There’s been over 400 over a period of 24 hours and it hasn’t calmed down. People that never were a part of Reddit have come out and started not only to interact but to be a vital part of the future of the community.

Creating a community isn’t something groundbreaking, many other streamers have it for their communities and has done nothing but helped. The reason why we’re using discourse is due to their goals of making engagement and discussion the key feature.

At the same time we’re updating and adding new features all the time. We’re already connected with the Twitch API so the viewers can login with their Twitch account. In the future we want to distinguish the subscribers, the same way as in the Twitch channel, and eventually build something that even covers the ones that have signed up for the RollPlay Patreon.