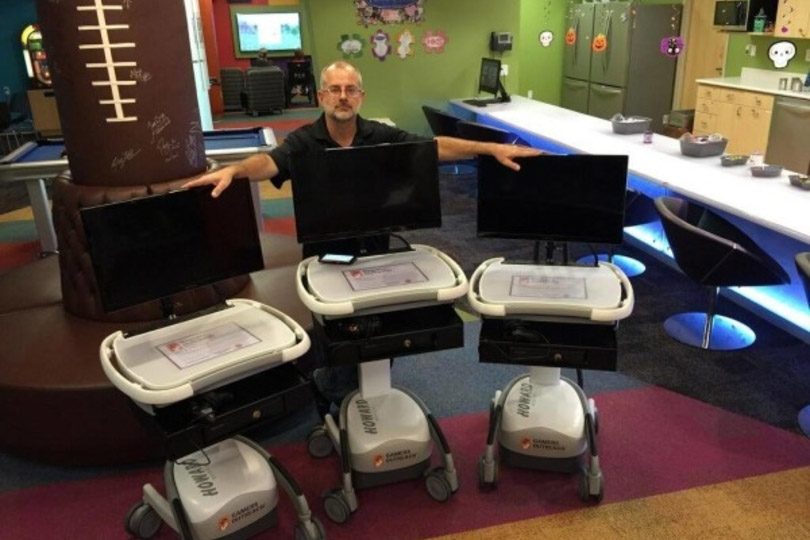 If you are not familiar with Gamers Outreach, they’re awesome. Gamers Outreach provides recreation to children in hospitals via a GO Kart – “a portable, medical-grade gaming kiosk nurses could use to transport video games and entertainment to children who were unable to leave their rooms within the hospital.” Find out more on the GO Kart at the Gamers Outreach Mission Page.

This project started out as a simple mission to provide a local hospital with video games for the children in 2009, and has grown considerably since. With the introduction of the special unit within Gamers Outreach – “The Dev Team” – they plan to reach many more children and hospitals.

Analogous to an advisory board, the Gamers Outreach Dev Team will be comprised of game industry veterans, medical professionals, and corporate leaders dedicated to advancing Gamers Outreach programs through fundraising, advocacy, and guidance.

Dev Team members will work to support directors and key staff within Gamers Outreach. They’ll be helping to lead development efforts which grow the impact of Gamers Outreach activities. Their involvement will provide our team with a valuable third-party perspective on internal discussions, and their passion for our cause will help rally community action.

Joining the “Dev Team” as the first member of this special unit is SirScoots. SirScoots, who helped to build the esports empire that we know today, is one of the members with the ‘gaming industry veterans’ title. He brings valuable experience and passion to the table which will help Gamers Outreach grow and continue to help more and more children.

With that said, we’re incredibly proud to welcome our first Dev Team member, Scott “SirScoots” Smith. One of the founding fathers of modern esports – we’re honored to have Scott as part of the Gamers Outreach family.

Scott is one of the most experienced figureheads within competitive gaming. After entering the scene as a Counter-Strike competitor in 1999, Scott joined the team of GotFrag, which was a leading source of news for hardcore enthusiasts interested in esports and professional gamers. After the website was purchased by Major League Gaming in 2007, Scott became the COO of Evil Geniuses (acquired by Twitch), one of the most storied professional gaming teams in esports. Having led players and teams to multiple tournament victories, Scott stepped down from active duty at EG to pursue new ventures within gaming. If you’ve kept up with competitive Counter-Strike, you’ve no doubt recently seen Scott behind the analyst desk, working to host some of the world’s largest esports events.

Scott has been a champion of our efforts the past few years. His involvement has directly led to the construction of multiple GO Karts for Phoenix Children’s Hospital, and his passion for our work has inspired multiple gamers to make an impact in their own local hospitals. Having accumulated nearly 20 years of game-industry experience, Scott joins Gamers Outreach with a wealth of knowledge, insight, and perspective that has already made a tremendous difference for hospitalized children.

With more members to join the team, we’re excited to how many lives Gamers Outreach can touch moving forward. Make sure you follow Gamers Outreach and SirScoots on Twitter for future updates.